From the back of a Holden utility, The Beatles waved to fans who lined the roads from the airport to town. The crowds outside their hotel, the St George, were so large that the Beatles had to be taken in secretly through the bottle shop entrance of the hotel. Management rushed the band up to the third floor balcony so fans could see them and not crash the hotel.

It was mayhem. “Girls were screaming uncontrollably, quite out of their tree”, people remembered. Police used dogs to clear crowds from verandahs and other vantage points. Teenagers pushed over and damaged two police motorbikes; there was so much pushing that one of The Beatles’ cars was shunted backwards, even with the handbrake on.

Fans trekked back to The Beatles’ hotel after the concert. The band was stuck inside as crowds gathered outside. Some kept up a late-night vigil on the hill behind the hotel. Others tried to get round the strict security; four girls strolled onto the sixth floor into the arms of Ringo Starr. His response was, “Now girls, no nonsense or else I’ll leave.”

Scandal nearly engulfed the tour when a 20-year-old slashed her wrists in the room of a member of the band’s support entourage after he refused an introduction to the band. The drama came to light when a policeman saw her through the window; the door was broken down with a battering ram. Headlines the following day said “Girl tries to die for Beatles”, but reporters later made a hastily concocted disclaimer.

The Hotel St George occupies one of the best known corners in Wellington. In 1851 the Union Bank of Australia built a bank here; this was rebuilt after the 1855 earthquake and included a manager’s residence. In 1877 the bank moved to the commercial centre of town and businessman John Plimmer converted the building into one of Wellington’s most celebrated hotels. He added a storey to the Willis St elevation and, on the outside of the facade, placed carved timber sculptures of the heads of prominent Wellingtonians of the time, including Plimmer himself. For that reason the hotel became known as the Old Identities Hotel.

The property was bought by Grand Central Buildings Ltd who demolished the old hotel in April 1929 to make way for a new one. The heads were removed to the National Museum, where it is understood they are still held. The Hotel St George was designed by William Prouse in the vogue Art Deco style and was intended to complement the contemporary, Majestic Theatre a little further north on Willis St. That building was also designed by Prouse. At the time of its building the hotel was one of the biggest in New Zealand and was lauded for the modernity of its form and fittings. The builders were Hansford and Mills, who also built the DIC, and the total cost of the building was £100,000. 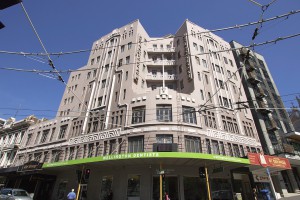